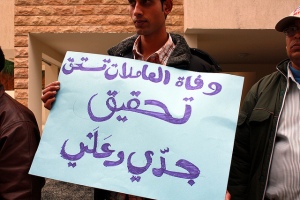 "The Deaths of Female Workers Deserve Serious and Public Investigations"

A vigil for Samoay Wanching Tamang was held yesterday around 3 PM in Jdeide to commemorate the life and remember the death of this 30-year old woman who came from her home country hoping to build a better life for the child she left behind in Nepal.

On February 26, 2011, she was found hanging “from a cloth tied to a metal bar in the bedroom of her employer J. J. (born in 1938) living in Jdeideh, Sa’ad street. The cloth was taken from a robe of her elderly employer,” as was coldly reported by Lebanon Files.

The police reported her case a “suicide,” another crazy foreign worker killing herself for no reason, and decided there was no reason to pursue the case. No one asked what lead her to take the fatal step, or in what circumstances she was led to end her own life.

Through our independent investigation, we found out that her daughter in Nepal was suffering an extended illness and depended on her mother’s monthly financial support to buy the medicine she desperately needed. Why would a mother, knowing that she was the only thing stopping her daughter from death, take her own life? What sorts of pressure was she under at her employer’s home?

These are questions the Police never asked. The Police have decided that this life, this innocent Nepalese life, is not worth a thorough investigation.

And yesterday, we stood up, 20 Nepalese and 10 Lebanese & Foreigners, and raised banners in front of her employer’s apartment in view of all the neighbors commemorating her death and demanding an investigation.

In Lebanon, when a person dies, death notices are posted to mark their passing, inform the neighborhood, and commemorate her or his life. Her employers having denied her this right, today we stood 30-strong and held candles to mark her passing.

We hope this will be the last vigil, but unfortunately, with an average of one migrant worker dying a week in Lebanon, we are saddened to say that we do not expect this to be.

Postscript: A few hours after the vigil, we returned home and found this on the computer: 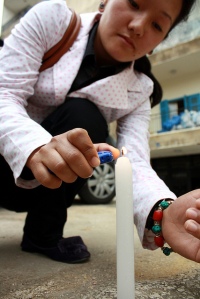 For more information on Samoay’s life and death, here.

For more photos from today, here.

We aim to improve the situation of migrant workers in Lebanon through grassroots initiatives.